Pathways into the interior:

The project aims to investigate the relationship between human subsistence strategies, technological innovation and environmental change over time. Of particular interest is the period when people first arrive in Sahul (Pleistocene Australia-New Guinea), and subsequent developments that emerged through to the Holocene, tracking the emergence of agriculture in the Papua New Guinea highlands. The multidisciplinary project is focused on an inter-montane valley – the Simbai-Wañelek corridor - one of three possible corridors in the initial occupation of the highlands, an important route in the evolution of trade links with the north coast, as well as a locus for related technological developments.

The study purposefully targets a key geographic locale where there is evidence for a Pleistocene human presence, and technological innovation and trade-links has been identified – the Kaironk –Simbai Valleys in the Madang Province PNG (Bulmer, 1982,1991). With the development of new techniques for the study of plants preserved in archaeological and ‘naturally accumulated’ sequences, a more detailed and comprehensive study of the these valleys is now possible. The Kaironk and Simbai Valleys are located between the Ramu River and Jimi River valleys on the northern side of the central cordillera of PNG and are ideally placed to answer questions about changing landscape use through time. It is also a potentially important conduit between the PNG north coast and the highlands in terms of trade routes (stone, salt), and as a centre for technological development (Swadling, 2010).

Establishing the settlement history of the Kaironk and Simbai Valleys, particularly the associated substance behaviours, will help understand the impacts of long-term human-environmental interactions. Considering the trajectories now identified for highland plant use – the emergence of agriculture in the early Holocene at Kuk Swamp (c. 65km to the SW) –the targeted research area may yield important insights into plant and landscape exploitation strategies leading up to this period, a record which is absent from the Wahgi Valley where the Kuk Swamp sequence is found (Denham et al., 2003).

The research program will:

i) tackle a key problem in Sahul (and world) prehistory - when and how people moved into and settled new environments, in this case the remote highland areas of PNG;

ii) determine the role of inter-montane valleys in the development of highland agriculture, new technologies and trade-links (pottery/Taro) between the coast and the highlands from the Pleistocene through the Holocene;

iv) construct an environmental context for the archaeology by building a picture of human-environmental interactions and climatic covering the Late Pleistocene-Holocene period.

We anticipate that this study will effect a significant advance in our understanding of the timing of colonization of the New Guinea highlands and the subsistence strategies and technological developments that ensued with permanent settlement of these environmental zones. The study will also fill a number of gaps in current knowledge of the challenges faced by people in the long-term settlement of these inter-montane valleys during periods of climatic flux, the impact of climatic flux on vegetation communities and economic plant resources, and the potential of these locations to support viable human populations during these times.

Previous research in the Kaironk Valley (Sue Bulmer, 1972) reported Pleistocene ages for post-holes at Wañelek site and suggested that structures were being erected by at least c.19-18,000 years ago. However, we suspect, that like the Ivane Valley (see White et al., 1970), these results from the early 1970’s (Bulmer, 1977, 1982) may provide only a minimum age for a human presence in this part of the highlands. A comprehensive survey and excavation program has real potential to extend the known antiquity of the region (see Swadling & Hide 2005; Summerhayes, 2006).

The project brings together an international multidisciplinary team with complimentary skills. The project is investigating the archaeological and plant records of the research area to further our understanding of the skills and adaptations adopted by colonising modern human populations. The research program effectively tests the Denham et al (2009) model of ‘generalist behaviour packages’ as the key to flexible subsistence strategies facilitating the rapid diffusion of people across new environments and land masses. If we are to further our understanding of human-environmental interactions through time and build a complete picture of chronologies and behavioral traits of Homo sapiens as it spread across the globe, then targeted studies are required to focus on key areas like PNG and archaeological sequences therein.

The investigation of the prehistory of the Papua New Guinea highlands is an ARC funded project awarded to Dr Judith Field (BEES, UNSW) and Professor Glenn Summerhayes (Otago University, NZ) for the period 2015-2017. The research is being supported by a number of collaborations as well as a Postdoctoral Research Fellow (Dr Ben Shaw, BEES). The National Museum and Art Gallery of PNG have been involved in the project since it inception, first by the involvement of the late Mr Herman Mandui (Archaeologist, NMAG) and subsequently with input and assistance from Mr Alois Kuaso (Deputy Director) and Mr Henry Arifeae. A collaboration with the National Forestry Institute in Lae has benefited from the botanical expertise Mr Michael Lovave and Mr Thomas Magun. Professor Lisa Kealhofer (Santa Calra University, USW), Associate Professor Scott Mooney (BEES, UNSW), Professor Simon Haberle (ANU) and Associate Professor Andy Fairbairn (University of Queensland) are providing their time to assist in the study of both micro (pollen, charcoal, phytoltihs) and macro (seeds, and other plant parts) fossils.

2013: Field, Summerhayes and Mandui travelled to the Simbai/Kaironk Valleys to pursue consultation with the local communities and to obtain permission and consent to undertake a project in the area. 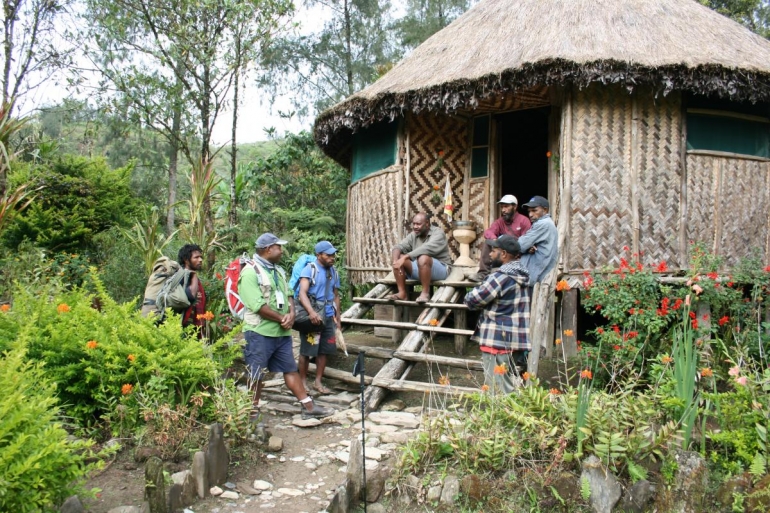 Michael Lovave (green shirt) and the late Mr Herman Mandui (centre) with staff of the Kalam Guesthouse in November 2013.

2016: Judith Field, Ben Shaw and Henry Arifeae returned to Simbai to undertake further survey and excavation prior to the extended fieldtrip planned for later July 2016. 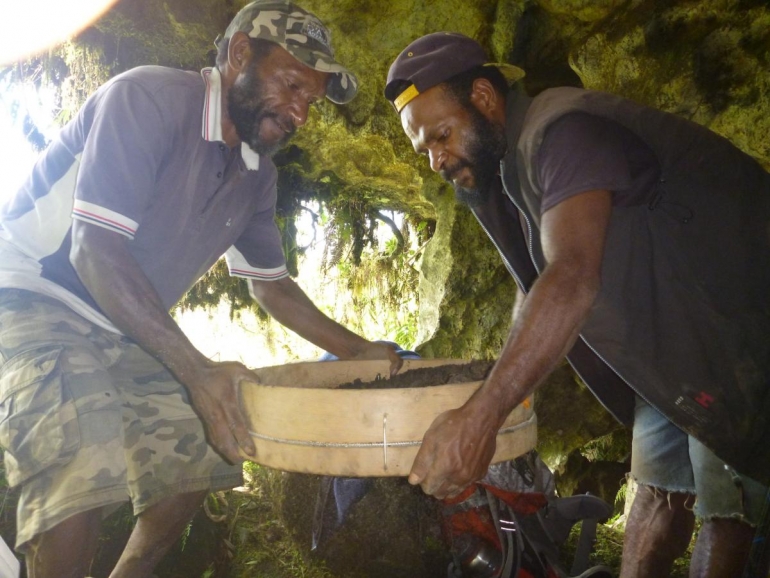 Sieving the first from the excavation at Kambarak Kamb Cave 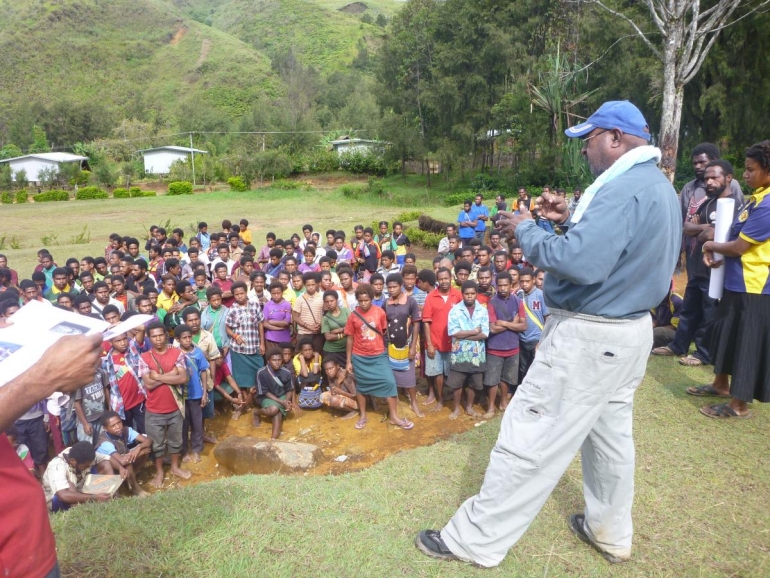 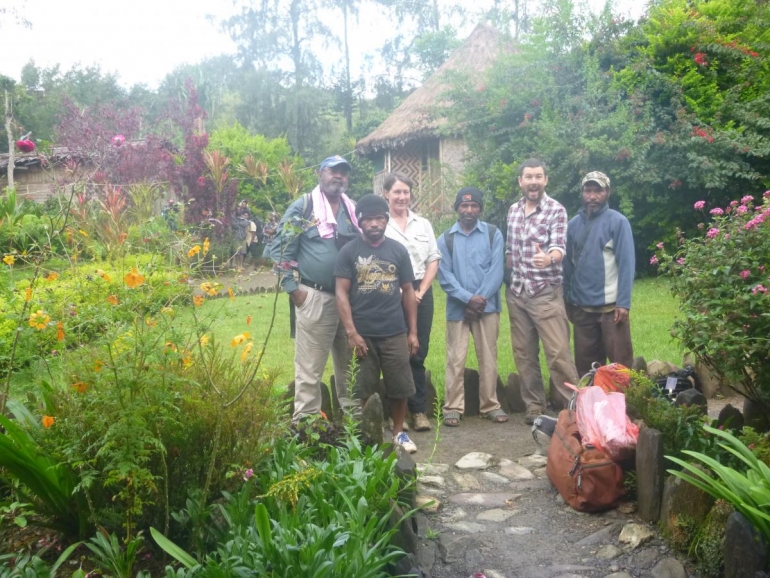 Our last morning at the beautiful Kalam Guest House with our fantastic hosts Dickson Kangi, Ronald Yenemb and John Rama