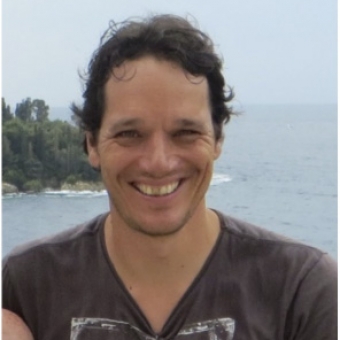 I hold a Masters degree from the Rheinische Friedrich Wilhelms University in Bonn, Germany (1996) and obtained a PhD from University of New South Wales (2001). From 2001-2004 I worked as a Senior Scientist at the biotech company Nucleics Pty Ltd. In 2004 I returned to academia as a Senior Research Associate within the Centre for Marine Bio-Innovation (CMB) at UNSW and received a fellowship from the American Australian Association in 2005. I went on to become a Senior Research Fellow after being awarded a fellowship from the Australian Research Council (ARC) (2006-2009). In December 2009, I took on a Senior Lecturer position at the School of Biotechnology and Biomolecular Sciences (BABS) at UNSW, was appointed an Associate Professor in 2013 and awarded an ARC Future Fellowship in 2014. In 2016, I became the Director of the CMB and moved to the School of Biological, Earth and Environmental Sciences (BEES) at UNSW, where I was promoted to Professor in 2017. During 2018-2020 I formed the Centre for Marine Science and Innovation (CMSI) and directed it during this period.

I have been the Chair for Division 3 and the Special Interest Group "Microbial Informatics" of the Australian Society of Microbiology (ASM). I have been a Member of the Organising Committee for the 10th International Marine Biotechnology Conference in Brisbane (2013) as well as the Australian New Zealand Marine Biotechnology Conference in Sydney (2019). I have made on-going contributions to public policy and engagement. From 2010-2014, I was on the National Scientific Advisory Committee of the ASM. In 2015, I was elected to the Ecosystem Science Council (ESC) for a 4-year term. These prestigious professional appointments allowed me to contribute to the overall directions of the scientific fields of microbiology and ecology, engage with end-users and communicate key findings to the public.

My research focuses on the interaction of bacteria with their environment and aims to understand the function of the enormous diversity of bacteria in natural systems. My students, co-workers and I explore the microbial world, for example by high-throughput DNA sequencing and the use of bioinformatics, to make predictions about functional and ecological properties of bacterial communities. Ultimately, we perform directed experiments to support our predictions and establish a clear link between function and diversity. Current project include:

Marine sponges acquire nutrients by filtering and eating bacteria from the seawater, but they also at the same time harbour a remarkable diversity of bacterial symbionts that don’t get digested. We have discovered that the genomes of bacterial sponge symbionts carry a large number of proteins that are similar to eukaryotic proteins controlling phagocytosis and cytoskeletal formation (Fan et al. PNAS USA 2012, Nguyen et al. Molecular Ecology 2013, Reynolds & Thomas Molecular Ecology 2016). We hypothesise that symbionts use these protein to “manipulate” the sponge and will test this with a range of phylogenetic and molecular approaches. The outcome of this project will provide important information on the evolution of microbe-host interactions.

Microbial diversity in the marine environment is enormous and often 1000s of different species are found in a single habitat (e.g. Thomas et al. Nature Communications 2016). We have recently postulated that much of the diversity encountered is due to chance (“lottery hypothesis”) and that bacterial communities are assembled from “guilds” of functional equivalent organisms (Burke et al. PNAS USA 2011). Through high-throughput sequencing we have provided evidence for this hypothesis (e.g. Roth-Schulze et al. Environmental Microbiology 2016 & Molecular Ecology 2018) and we are exploring, which functions define particular communities in specific habitats. This project will provide an important conceptual advancement in the field of microbial ecology as it aims to define the assembly of microbial communities by functional properties rather than by the species.

Microbial genomes exhibit a high degree of plasticity (or variability) and any given microbial population (defined as a collection of closely-related individuals) is far more heterogenous in its genetic composition than previously assumed. Sequencing of entire populations now allows for a comprehensive observation of genome evolution on a molecular level. This approach is being employed to the model organism Pseudomonas aeruginosa to understand its adaptation and evolution to conditions of environmental and medical relevance (McElroy PNAS USA 2041). We also expanding this approach to entire microbial communities (i.e. collection of distantly-related individuals), with particular focus on how horizontal gene transfer influences microbial evolution. This work also often leads to the development of novel bioinformatics tool to process large volumes of next-generation sequencing data.

4. Antibiotics and resistance in the environment

Given the large diversity of microorganisms in the environment, it is likely that the harbour novel antibiotics as well as resistance against existing antibiotics. We explore this by classical microbiological approaches and also high-throughput screening and functional analysis of microbial communities. This research is particular important in the light of “superbugs” that are resistant to most existing antibiotics and that cause substantial problems in the health system.