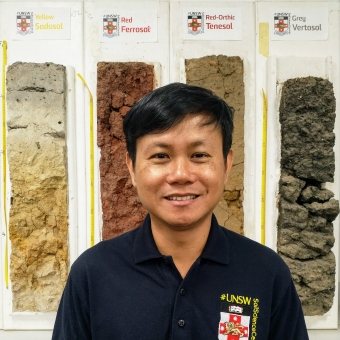 1. Everyone help each other with their own individual professional knowledges.

2. As a PhD student, a fabulous supervisor keep stimulating us a lots to be realised ourselves and to develop not only knowledges but also English language skills through every activities, for example, top 3 things in what we have done during the day or the periods.

3. A strong sense of research team that is providing a fabulous chance to anyone in developing of research skills and in every steps of research activities.

Most cultivated upland areas of northeast Thailand are being used for cash crops. However, these areas are characterized by sandy and infertile soils, which are difficult to improve agriculturally. Information about the clay (%) and cation exchange capacity (CEC – cmol(+)/kg) are required, respectively. Because it is expensive to sample, prepare and analyse these soil properties, proximal sensed data acquired from electromagnetic (EM) induction instruments are increasingly being used. This is because the measured apparent soil electrical conductivity (ECa – mS/m), can often be correlated directly with measured topsoil (0-0.3 m), subsurface (0.3-0.6 m) and subsoil (0.6-0.9 m) clay and CEC. In this study, we explore the potential to use this approach and considering a linear regression (LR) between EM38 acquired ECa in the horizontal (ECah) and vertical (ECav) modes of operation and the soil properties at each of these depths. We compare this approach with a universal LR relationship we develop between the calculated true electrical conductivity (s – mS/m) and laboratory measured clay and CEC at various depths. We estimate s by inverting the ECah and ECav data, using a quasi-3d inversion algorithm (EM4Soil). The best LR between ECa and the soil properties was between ECah and subsoil clay (R2 = 0.43) and subsoil CEC (0.56). We concluded these LR were unsatisfactory to predict clay or CEC at any of the three depths. In comparison, we found that a universal LR could be established between s obtained from using the S1 inversion algorithm, full-solution (FS) and using a damping factor (λ) = 0.07 and 0.9 with clay (R2 = 0.65) and CEC (0.68), respectively. The LR model validation was tested using a leave-one-out-cross-validation. The results indicated that the universal LR between s and clay at any depth was precise (RMSE = 2.17), unbiased (ME = 0.12) and very good concordance (Lin’s = 0.86). Similarly, very satisfactory results were obtained by the LR between s and CEC (RMSE = 0.53; ME = -0.03 and Lin’s = 0.82). The implications of these results are that in a field which does not vary spatially in terms of clay or CEC and therefore cannot be directly correlated with ECa across a field, can still be mapped by developing a LR model between estimates of s with soil properties at any depth (i.e. topsoil, subsurface and subsoil).