If there is life on Venus, how could it have got there? Origin of life experts explain

Considering what we know about the key ingredients for life's formation on Earth, here are three explanations for how this process may have occurred on our sister planet.
Luke Steller and Martin Van Kranendonk | UNSW Newsroom 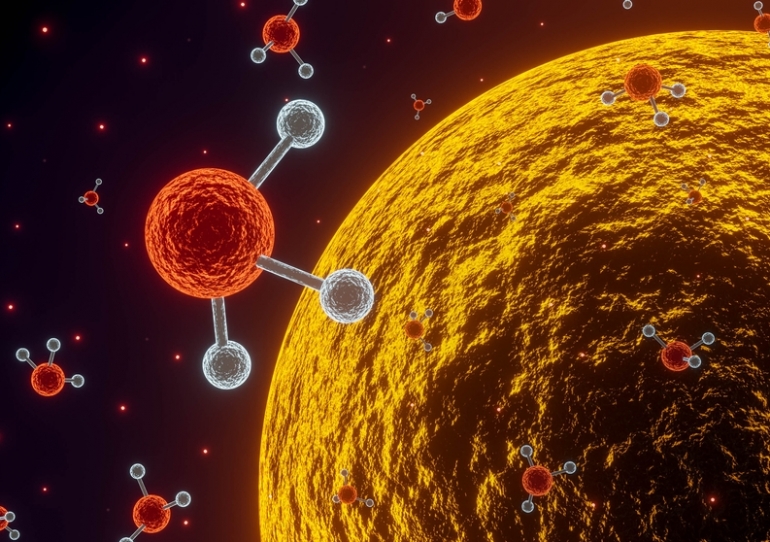 The recent discovery of phosphine in the atmosphere of Venus is exciting, as it may serve as a potential sign of life (among other possible explanations).

The researchers, who published their findings in Nature Astronomy, couldn’t really explain how the phosphine got there.

They explored all conceivable possibilities, including lightning, volcanoes and even delivery by meteorites. But each source they modelled couldn’t produce the amount of phosphine detected.

Most phosphine in Earth’s atmosphere is produced by living microbes. So the possibility of life on Venus producing phosphine can’t be ignored.

But the researchers, led by UK astronomer Jane Greaves, say their discovery “is not robust evidence for life” on Venus. Rather, it’s evidence of “anomalous and unexplained chemistry”, of which biological processes are just one possible origin.

If life were to exist on Venus, how could it have come about? Exploring the origins of life on Earth might shed some light.

The ingredients for life (as we know it)

Understanding how life formed on Earth not only helps us understand our own origins, but could also provide insight into the key ingredients needed for life, as we know it, to form.

The details around the origins of life on Earth are still shrouded in mystery, with multiple competing scientific theories. But most theories include a common set of environmental conditions considered vital for life. These are:

Water is needed to dissolve the molecules needed for life, to facilitate their chemical reactions. Although other solvents (such as methane) have been suggested to potentially support life, water is most likely. This is because it can dissolve a huge range of different molecules and is found throughout the universe.

Temperatures higher than 122°C destroy most complex organic molecules. This would make it almost impossible for carbon-based life to form in very hot environments.

A process to concentrate molecules

As the origin of life would have required a large amount of organic molecules, a process to concentrate organics from the diluted surrounding environment would be required – either through absorption onto mineral surfaces, evaporation or floating on top of water in oily slicks.

For life to have originated, there would have had to be a complex natural environment wherein a diverse range of conditions (temperature, pH and salt concentrations) could create chemical complexity. Life itself is incredibly complex, so even the most primitive versions would need a complex environment to originate.

A range of trace metals, amassed through water-rock interactions, would be needed to promote the formation of organic molecules.

So if these are the conditions required for life, what does that tell us about the likelihood of life forming on Venus? 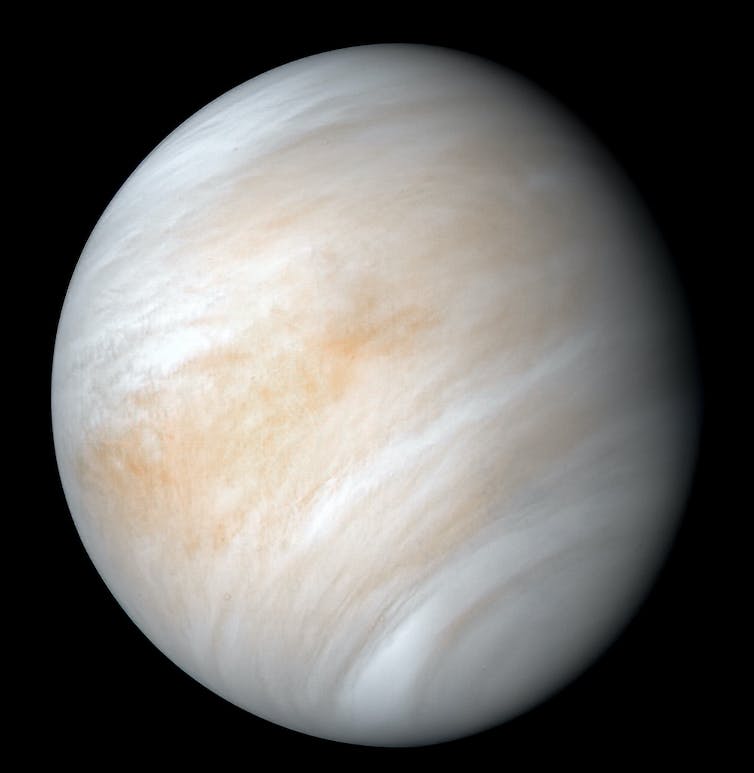 Venus has 90 times the atmospheric pressure of Earth. NASA

The possibility of life as we know it forming on the surface of present-day Venus is incredibly low. An average surface temperature above 400℃ means the surface can’t possibly have liquid water and this heat would also destroy most organic molecules.

Venus’s milder upper atmosphere, however, has temperatures low enough for water droplets to form and thus could potentially be suitable for the formation of life.

That said, this environment has its own limitations, such as clouds of sulfuric acid which would destroy any organic molecules not protected by a cell. For example, on Earth, molecules such as DNA are rapidly destroyed by acidic conditions, although some bacteria can survive in extremely acidic environments.

Also, the constant falling of water droplets from Venus’s atmosphere down to its extremely hot surface would destroy any unprotected organic molecules in the droplets.

Beyond this, with no surfaces or mineral grains in the Venusian atmosphere on which organic molecules could concentrate, any chemical building blocks for life would be scattered through a diluted atmosphere – making it incredibly difficult for life to form.

… but possibly less unlikely in the past

Bearing all this in mind, if atmospheric phosphine is indeed a sign of life on Venus, there are three main explanations for how it could have formed.

Life may have formed on the planet’s surface when its conditions were very different to now.

Modelling suggests the surface of early Venus was very similar to early Earth, with lakes (or even oceans) of water and mild conditions. This was before a runaway greenhouse effect turned the planet into the hellscape it is today. 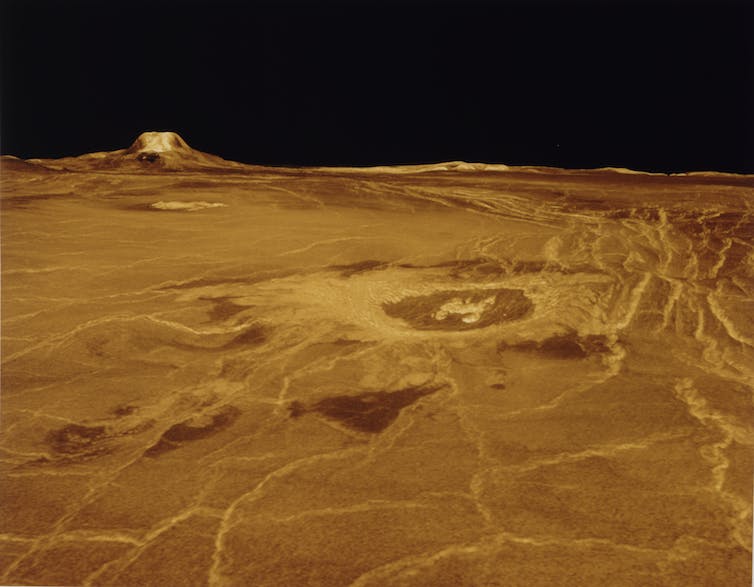 This is a computer-generated picture of the Eistla Regio region on Venus’s surface. NASA

If life formed back then, it might have adapted to spread into the clouds. Then, when intense climate change boiled the oceans away – killing all surface-based life – microbes in the clouds would have become the last outpost for life on Venus.

Another possibility is that life in Venus’s atmosphere (if there is any) came from Earth.

The planets of our inner solar system have been documented to exchange materials in the past. When meteorites crash into a planet, they can send that planet’s rocks hurtling into space where they occasionally intersect with the orbits of other planets.

If this happened between Earth and Venus at some point, the rocks from Earth may have contained microbial life that could have adapted to Venus’s highly acidic clouds (similar to Earth’s acid-resistant bacteria). 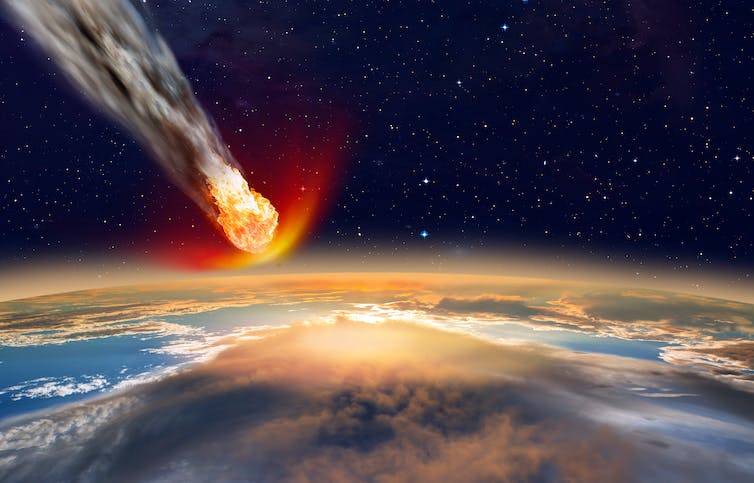 If rocks from Earth containing microbial life entered Venus’s orbit in the past, this life may have adapted to Venus’s atmospheric conditions. Shutterstock

The third explanation to consider is that a truly alien form of life (life as we don’t know it) could have formed on Venus’s 400°C surface and survives there to this day.

Such a foreign life probably wouldn’t be carbon-based, as nearly all complex carbon molecules break down at extreme temperatures.

Although carbon-based life produces phosphine on Earth, it’s impossible to say only carbon-based life can produce phosphine. Therefore, even if totally alien life exists on Venus, it may produce molecules that are still recognisable as a potential sign of life.

It’s only through further missions and research that we can find out whether there is, or was, life on Venus. As prominent scientist Carl Sagan once said: “extraordinary claims require extraordinary evidence”.

Luckily, two of the four finalist proposals for NASA’s next round of funding for planetary exploration are focused on Venus.

These include VERITAS, an orbiter proposed to map the surface of Venus, and DAVINCI+, proposed to drop through the planet’s skies and sample different atmospheric layers on the way down.

This article is republished from The Conversation under a Creative Commons license. Read the original article.